Repress of the re-issue. Now on white wax.

An often considered Psychedelic, Acid Rock, Heavy Rock, Hard Rock group from London, England, whose only album was originally released in the U.S. exclusively.
“Orang Utan featured musicians from several other notable dissolving bands, that had been playing in north London in the late 60s. Singer Terry “Nobby” Clarke was co-founder of the band Jason Crest. They recorded their album at a 16 track studio facility in London. The band’s only album was released on the U.S. Bell Records label in 1970. Several of the songs are nothing short of brilliant and serve to show what incredible talent these young 19-20 year old musicians possessed. Most all of the music was written and composed by Jeff Seopardie who was the drummer, with the majority of the guitar & bass riffs being developed and played by Mick Clarke & Paul Roberts respectively.
“Musically, Orang Utan features great twin lead guitar work and some long tracks with titles like “Chocolate Piano” this is similar in style to Leaf Hound and early Led Zeppelin with a late ’60’s U.S. feel.“ 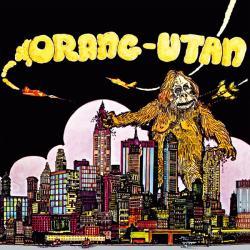