Residing in Rio de Janeiro, Vasconcelos Sentimento is a self-taught composer, producer and multi-instrumentalist. A mosaic of lo-fi breaks, cosmic ambient jazz and wonky chromatic funk, the eccentric Brazilian DIY wizard’s debut album Furto beautifully pieces together a huge range of seemingly disparate sonic elements. Calling himself an “amateur euphoric sound researcher”, he has no formal training in either music theory or production, and it’s simply by following his ear that has led him to creating his debut album for Far Out Recordings.

Sentimento is not afraid to admit what he himself sees as acts of theft. (Furto=Theft in Portuguese). But while the debate surrounding the ethics of sampling is a never ending one, Sentimento’s music – while it does contain the odd sample, including an interview with Joe Davis himself, “One For The Masta Digga”) – steals in an entirely different way. His creative process involves an intensive period, in which he’ll listen to just one artist or song over and over, for days and weeks on end. Then he’ll head to his rudimentary bedroom studio, which, as he puts it, is “built for speed”, hit record and “blurt” whatever comes out. “I never spend more than a day working on any one song idea”…

Picasso once said “lesser artists borrow; great artists steal”. And it’s through this process of ‘Furto’ that Vasconcelos Sentimento has somewhat ironically cultivated a sound that is unmistakably his own.

A1. Velhas Maos Novos Tapas
A2. Ai Meu Deus
A3. Passarinho
A4. Cama Do Estoque
A5. Movimento
A6. Burkina
A7. Lucca
A8. Novo Velho
A9. Atraso Granular
A10 Tender Strings 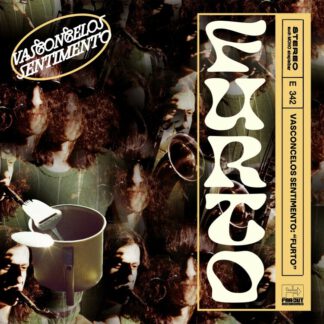